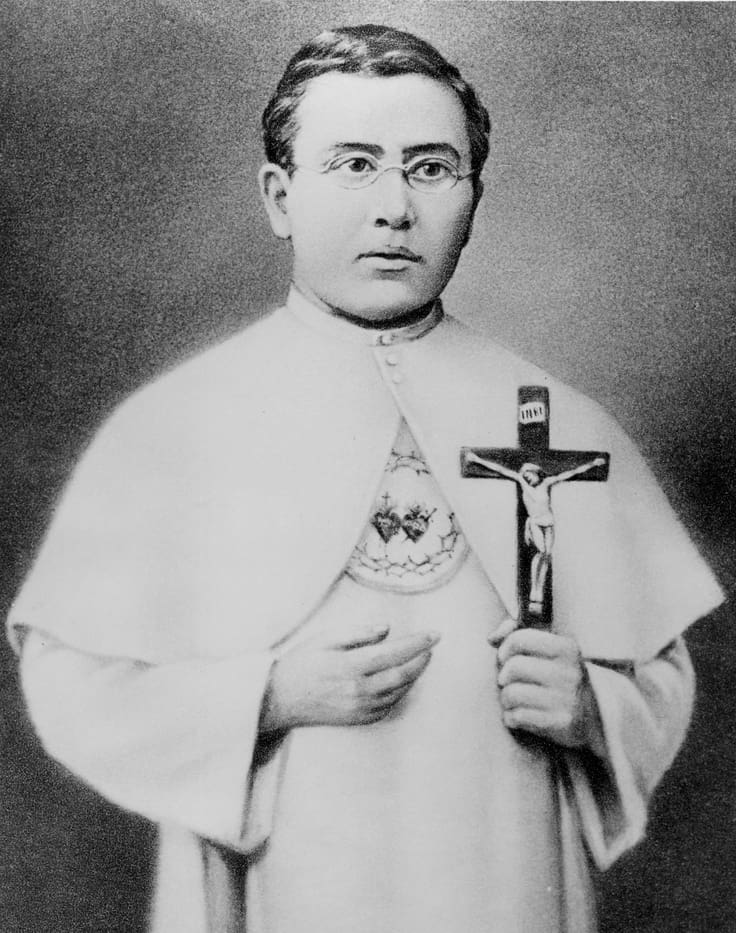 “I was sick and ye visited me.” – J. Damien de Veuster (Inscription of St. Damien in the Bible of a visitor to the island)

“Greater love hath no man than this, that a man lay down his life for his friends.” – Jesus Christ

Imagine an island where people are sent to die of a horrific, flesh rotting disease. They are cut off from family and friends, and they have no medical care and no hope. Now imagine volunteering to live among them, and eventually, to die as one of them.

Jozef de Veuster was born in Belgium on January 3, 1840. At the age of 20, he joined the Congregation of the Sacred Hearts of Jesus and Mary, a missionary order, taking the religious name Damien.

While his great desire was to become a priest, his superiors believed he lacked the necessary education. Nevertheless, Damien was undeterred, and he would daily pray before an image of St. Francis Xavier, the great missionary to the East, that he might someday be a missionary too. Finally, after leaning Latin with the help of his brother, who was also studying to be a priest, Damien was allowed to pursue ordination.

Even though he was allowed to pursue ordination, Damien’s superiors refused to send him on mission, despite his constant pleading. They believed he would make a poor and ineffective missionary. Finally, his chance came when his brother, who was to be sent to the missions in the Hawaiian islands, became seriously ill and was unable to travel. Damien immediately appealed to his superiors, asking to take his brothers place. At last, they consented.

Once in Hawaii, he began the difficult work of a missionary priest, eventually serving a parish area of 180 square miles. He traveled on foot, visiting the Catholics scattered throughout his huge parish, hearing confessions and saying mass. This work he continued untiringly for the next nine years.

Eventually, news of a leprosy outbreak spread to Fr. Damien’s parish, and some of his parishioners were unfortunate enough to be infected by it.

Now, at that time, leprosy was the most feared disease of all, as it had been for centuries. Contracting it meant certain death—but not before one had suffered years of slow bodily decay and disfigurement.

Since there was no known cure, and the disease was considered highly contagious, quarantining those infected was the only solution. And that’s exactly what the Hawaiian government began to do, ruthlessly hunting down and quarantining lepers on the small island of Molokai.

In short, leprosy victims no only had to face the future of death by an horrific disease, they also had to experience the trauma of being violently separated from their families and loved once, often on a moments notice.

The more Fr. Damien learned about the island of Molokai, the more concerned he grew. He could not sit idly by while hundreds of Hawaiians, many of whom he knew personally, were sent to die gruesomely with no spiritual care and no contact with the outside world.

Eventually, his concern grew into a desire for action, and he petitioned his Bishop to leave his current missionary assignment and move to Molokai. While deeply saddened at the thought of sending such a young, vibrant priest to face almost certain death, the bishop was moved by Fr. Damien’s zeal and compassion for the lepers, and he consented.

Fr. Damien arrived on the island of Molokai on May 10, 1873. The bishop introduced him to the some 600 lepers on the island as “one who will be a father to you, and who loves you so much that he does not hesitate to become one of you; to live and die with you.”

For the next 16 years, Damien taught the Catholic faith, built homes, administered the sacraments, erected a chapel, provided comfort and medical care for the sick and dying, and said funeral masses for those who finally succumbed to the disease. He transformed the island from a place of horror, despair, and moral debauchery into one of faith, hope and peace.

Fr. Damien has a special devotion to the Eucharist, and it was through the Eucharist that he found the strength to carry on his extremely difficult work.

Holy Communion being the daily bread of a priest, I feel myself happy, well pleased, and resigned in the rather exceptional circumstances in which it has pleased Divine Providence to put me. Were it not for the constant presence of our divine Master in our humble chapel, I would not have found it possible to persevere in sharing the lot of the afflicted in Molokai…the Eucharist is the bread that gives strength. It is at once the most eloquent proof of his love and the most powerful means of foster His love in us. He gives Himself every day so hat our hearts as burning coals may set afire the hearts of the faithful.

Finally, after years of tireless labor among the most despised and forgotten, Fr. Damien faced his parishioners after mass one Sunday. “My brethren,” he began, “we lepers…” Fr. Damien had contracted leprosy.

The disease slowly progressed, and shortly after his 49th birthday, he wrote the following to a friend:

I am still able, but not without some difficulty, to stand every day at the altar, where I do not forget any of you. Do you in return pray and get prayers for me, who am being drawn gently toward the grave. May God strengthen me and give me the strength of perseverance and of a happy death….I try to make slowly my way of the Cross and hope soon to be on top of my Golgotha.

On April 15, 1889, Fr. Damien died on the island of Molokai at the age of 49, surrounded by those he loved the most: the lepers. Upon his death, several witnesses reported that all signs of leprosy disappeared from his face. He was canonized on October 11, 2009. Saint Damien is the patron of those with leprosy.